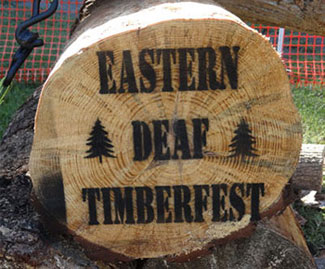 This story is given by the co-founders Bruce Hubbard and Ron Markel of how the EDT was formed.

After Bruce flew to Oregon for 10th Annual World Deaf Timberfest during 1991 Labor Day Weekend, he met Ron Markel during one of the Interstate Association of the Deaf (IAD) Dingo Night and Bruce talked about timberfest there that he learned a lot and wanted to have our own one since he knew that Ron is working for his own business of lumber. Ron did talk about to establish one because he had been gone to watch hearing professional lumberjack once in a while. Ron did discuss with Barry Jones who worked with him about having our own one.

After Ron’s family, the Markel families, Barry Jones’ family, Bruce’s family, and some of IAD friends attended to the 2nd annual Northeast Deaf Timberfest during 1993 July 4th weekend, we decided to establish our own one. It was a good enough that Ron found a place in Carlisle, PA. Ron and Bruce called a special meeting with IAD officers and members.

Bruce Hubbard and Sean Markel went to see Pennsylvania Senator, Harris Wofford, at his Senate Office Building in Washington, DC and asked him if he can get the flag for EASTERN DEAF TIMBERFEST. Two weeks later we met him and he presented us a certification letter with the Flag of the United States of America that was flown over the U.S. Capital on May 10, 1994. This U.S. flag was flown for EASTERN DEAF TIMBERFEST. We agreed to have this flag every timberfest. Today you can see our United States Flag on the top of our EDT’s trailer.

Our first annual EASTERN DEAF TIMBERFEST was hosted by IAD at The Western Village Campground in Carlisle, PA during the 1994 Memorial Day Weekend and it was turned out a huge successful with 2,010 people coming. That U.S. flag was flown along with four other flags (MD, VA, PA and WV) to represent IAD. Our committees worked so hard to make our first timberfest success with the bless of Ron’s family including his four brothers and but not only to them, IAD members, who involved with us, did superb job. Then the members of IAD decided to continue our annual timberfest.

During the 1995 Labor Day Weekend, our second annual EASTERN DEAF TIMBERFEST was held at the Locust Campground in Lewistown, PA with 1,000 people coming. The co-owners of the campground, Dave and Jack Knox asked us to keep another one during sometime in 1996. We agreed to have this again.

In 1996, since our EASTERN DEAF TIMBERFEST grew stronger and bigger, we decided to have new titles for the officers for two years term. They were elected Bruce Hubbard, Executive Director; Ron Markel, Vice Executive Director; Sue Bart, Secretary and Marie Campbell, Treasurer. Bruce appointed Jim Flynn, Amy Markel, Robert Yeckley, Jr.Wilbur Wright and George Schroder as Board of Directors. He also appointed Gerald Pelarski and Larry Adkins as Trustees. Amy Markel and Bruce were working so hard as sweat and finally, the EASTERN DEAF TIMBERFEST got our own 501 (c) (3) non-profit organization. Again, Ron, Amy and Bruce got our EASTERN DEAF TIMBERFEST as amended articles for Incorporation for the State of Maryland on May 9, 1996. We established our own Constitution and By-Laws.

During the 1996 Memorial Day Weekend, our third annual EASTERN DEAF TIMBERFEST was held at the same campground in Lewistown, PA and it was turned out very good with 500 people coming. After this, our committees were worn out and asked to have biennial instead annual. We, the Board Members, agreed to have this idea due to several reasons. During that year, Amy suggested to have family camping trip and we agreed to form, “The NATURE CAMP for the FAMILIES”. 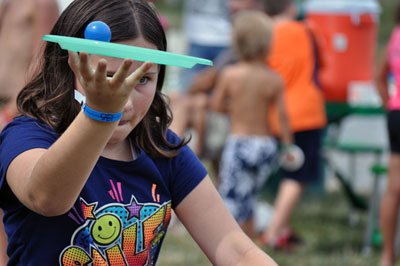 Our 1st NATURE CAMP for the FAMILIES was chaired by Amy Markel with the help from her husband, Sean and it was held at the KOA Campground in Front Royal during the 1997 Father’s Day Weekend. It was so successful with about 150 people coming as they were enjoying with canoeing and tubing trip as well as cavern tours. We agreed to keep our program to continue in every other odd years.

We had a huge blast successful EASTERN DEAF TIMBERFEST which was held at Mountain View Campground in Haymarket, VA during 1998 Father Day Weekend with 900 people coming. It was nice campground that has a man-made lake with beautiful “beach”. After this, we, the Board Members, voted to buy an used 18 wheeler trailer in order to organize our things on the shelves. Before this, three different companies loaned us to use their trailers and we had problems to keep our things in wrong places because everything was on the floor and mess. Some equipments were damaged.

During the 1999 Father Day Weekend, our 2nd Nature Camp for the Families turned out a great successful again with about 100 people. It was held at the Yogi Bear Campground in Luray, VA. They enjoyed to have the tour at the one of famous cavern called Luray Cavern. Chairlady Christina Bailey-Sentelli did a great job with the help from small group of volunteers.

In the year of 2000, we, the Board Members had meeting and we decided to change new names from Timberfest to Timberfest Sport. We had a great time at time at Nittany Mountain Campground for 5 th EASTERN DEAF TIMBERFEST on August 2nd to 6th. It turned out with 900 people coming. Beth did find this beautiful place with view of farm land and quiet place. It was good experience for her to have her biggest job. So, she was ready for next big 2002 Timberfest Sport.

On August 9 to 12, 2001, we had our 3rd Nature Camp for Families at Nittany Mountain Campground in New Columbia, PA with 150 people coming. They enjoyed to have Reptiland Tour, many outdoor activities and World Champ Deaf Magician, Matt Morgan. Again, Chairlady, Christina, did a great job.

On July 25 – 28, 2002 we had our 6th EASTERN DEAF TIMBERFEST at Lazy-A-Campground in Hedgesville, WV. This place was really cozy and “down earth”campground with farm field. And also, it was our first time to have whole deaf people on the campground because in the past we had deaf people who attended for Timberfest and we had to keep quiet in the evening because of hearing seasonal campers there. We had a blast loud parties there. Again, Beth did a superb job and but not only to her, our committees did their time to work with us as a teamwork. 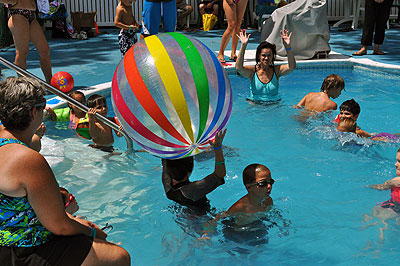 In early Spring of 2003, we had Board Members meeting and Beth Hortie asked us to sponsor the softball team. We voted to agree that we are sponsoring the EDT girl softball team. Then they won the champion at EAAD Softball Tournament in Frederick, MD and they also went to Florida for National Softball Tournament with 4th place. Beth did a wonderful job as coach for our team.

We had our 4th Nature Camp for Families at Rocky Gap State Park Campground on June 25 – 29, 2003 in Flintstone, MD. It was very beautiful place with nice beach on lake and mountain view. We enjoyed very much with children activities on our big area field. Most of them went to the beach in the afternoon because of hot weather. It turned out with 150 people coming. Dolores “DoDo”VonGarrel did a superb job.

We had a huge successful 10th Anniversary and 7th Timberfest Sport at Yogi Bear’s Jellystone Camp-Resort in Williamsport, MD on August 25 – 29, 2004 with a little over 1,200 people. Again, Allen did a good job as well as the committees. The camp manager, Cheryl Smith; Ron, Vicki and Brett Vitkun and their staffs were very good to work with us. THANKS TO THEM!!!

We enjoyed EDT’s Family/Youth Camp very much at Lake Raystown Resort & Lodge on July 13 to 17, 2005. We went to Lincoln Caverns and we also rode on the Proud Mary Showboat. Dolores and her young daughters signed the famous old song “Proud Mary” on the boat. 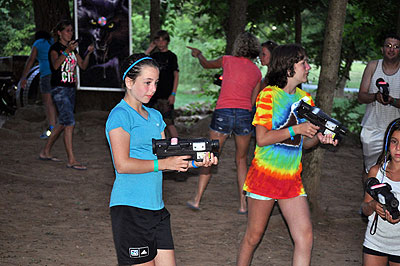 At our 12th Anniversary and 8th Timberfest Sport Event, we were enjoyed the view of Blue Ridge Mountain with a little over 950 people at Yogi Bear’s Jellystone Park Camp-Resorts in Natural Bridge, VA on June 29 – July 4, 2006. We had a lot of local attractions and we also enjoyed watching the fireworks.

The campowners, Maurice and Margie Detterman, are a really cool couple and their employees are too. Our committees showed their motivation and worked hard in order to make it a success.

This year, 2007, we will have our 6th Family/Youth Camp which will be held at Yogi Bear’s Jellystone Park Camp-Resorts in Williamsport, MD on July 26 to 29. This campground just added new waterslides and an outdoor activities “Winter Wonderland”. We will have ice skating, snowball fights and much more in spite of 90 degree weather. Come and join us.

We are sure that we will continue our activities in the future and look forward our next Timberfest Sport next year.